I was fortunate enough to take part in a chain game organised by the very clever Mr Terry Cavanagh. A chain game is when you do that old favourite parlour game the exquisite corpse except, instead of pictures or writing, you all make little computer games. 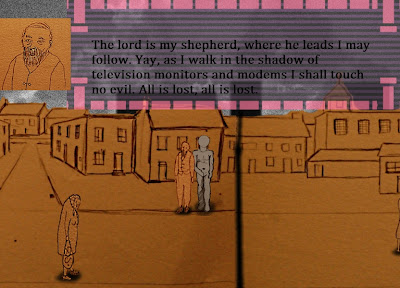 I was is some very talented company so my game sits in the shadows of some great games. Mr Michael Brough made a truly astounding game in the allocated time and I feel the download is worth it just to play his game. But I have failed to mention Zarathustra's game, it is also very fantastic and frankly inspiring. Now lets not forget my dear chum Jake Clover's game, gosh, how I did laugh with joy.

In retrospect, I'm not totally unhappy with my game, I tried something new with new tools and learnt some new dos and don'ts along the way. I fear my weakness in game making is the aspect which makes a thing a game. Game is becoming a word like reality in that I'm starting to feel it ought to always be in inverted commas. I like the pictures I made, kind of an L.S. Lowry meets Kafka theme.

I love how it makes up a whole now that all the parts can be seen together. I love how it all makes complete sense.
EXPERIMENT 12 windows only for the time being.